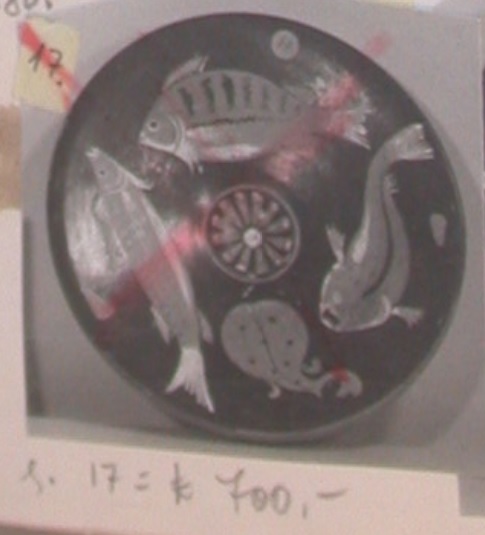 Apulian fish-plate attributed to the Darius Painter workshop, depicting three fish and a flounder swimming around a central depression with a rosette , scrolls around exterior rim, the decoration enriched with white paint, shells in the field.

On May 17, 1983, the fish-plate was consigned by Becchina at the Sotheby’s antiquities auction in London, as lot 262. It was sold for £700 and acquired by Jerome Eisenberg, owner of the Royal-Athena Galleries, New York.

The fish-plate appeared in the website of the Royal-Athena Galleries, with the provenance ‘J. M. E. collection, New York, acquired at Sotheby’s, London, May 1983’. Tsirogiannis identifies the fish-plate in October 2019, but it was already appearing as ‘SOLD’ on the website of Royal-Athena Galleries. In 2021 publishes an article referring also to this case (Tsirogiannis 2021).

Unknown. The identity of the person who purchased this fish-plate before October 2019 is not known and Royal-Athena Galleries was permanently closed in October 2020 announcing that the remaining artefacts were transferred to ‘Hixenbaugh Ancient Art’.